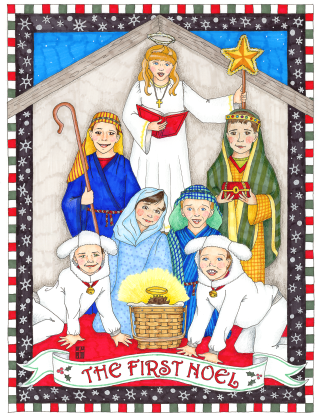 School had been back in session only a few weeks when the auditions were announced. A month later the cast was set. By Halloween lines were learned and choreography had begun. Seamstresses sewed angel gowns. Set designers painted backdrops and made mangers. By Thanksgiving the blocking was nearly complete, dress rehearsal had begun, programs were designed, signs went up all over the neighborhood. In the next few weeks lighting cues and sound checks were worked out, hair and makeup finalized, props collected and stored.

Finally, the big moment came, the curtain went up, and the greatest story ever told was told once more, presented in an enticing way, delighting all the senses of an audience who didn’t even realize how much they were longing for its message.

For many years I chased the peace and calm of Christmas hinted at in ‘Silent Night’ and  ‘Little Town of Bethlehem’. I had visions of cocoa, a warm fire and jigsaw puzzles dancing in my head. But those times never came until December 26th or later. I was beginning to feel that if I couldn’t quietly contemplate the advent of God with us, I was succumbing to the world’s distorted version of Christmas. I thought I was missing the point.

Friends, hear this! Christmas is not about anything peaceful or calm. An unmarried virgin giving birth in a stable in a strange town is not peaceful. The heavens cracking wide open over shepherds and sheep with thousands of God’s messengers singing to announce that birth is not calm! Stinky, sleepy shepherds running into town to that stable is not calm, and those same shepherds running through town yelling about the Messiah is not peaceful. A royal entourage arriving with fabulously expensive gifts is not calm. And soldiers flooding the town to exterminate male children is anything BUT peaceful.

This is a story to get excited over! A story filled with dreams, visions, the Holy Spirit, miracle pregnancies, difficult treks, lost voices, quizzical visitors, narrow escapes, and radiant angels with messages from God, Himself! And most amazing of all these amazing happenings…God came to dwell WITH US! God! The God who made galaxies. The God who parted the Red Sea, parted the Jordan River, brought down the thick walls of Jericho with just rams’ horns. God who wrote commandments for us with His own hand, who protected His people from famine, lions and flame, and turned kings into beasts. THAT God chose to come to earth to dwell with US!

And why? Because we were so awesome? No. In fact, we never fully obeyed, submitted or surrendered to Him. He came out of love. Despite our sad, sinful, rebellious state; like a compassionate parent, He saw us as worthy of love…worthy of redemption. He decided to do whatever it took to bring us into a restored, loving, fulfilling relationship with Him. And what it took was Jesus being born as the Messiah, God with us – a moment in time so profound, we renumbered our calendars for it!

The rush and crush of the holiday season is upon us. We, the Church can NOT be calm and peaceful. We’ve a message to bring to the nations, and we can’t be silent! This is the one time each year the unchurched may walk through our doors. In the plays, nativities, teas and bazaars, in the children’s choirs, cantatas, bells and recitals, in the decorations and devotions, we MUST be about our Father’s business – leading the lost sheep home to safe pasture. This is the time to open our doors, open our eyes and open our hearts to those who need our message and bring it to them. Let’s roll up our sleeves and get to work. There’s so much to do. So many to invite. We can rest in January.