The Desires of Your Heart
Write a New Chapter

A Fan or a Follower? 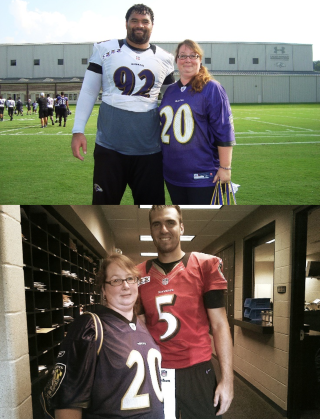 “Not all who sound religious are really godly people. They may refer to me as ‘Lord,’ but still won’t get to heaven. For the decisive question is whether they obey my Father in heaven.” Matthew 7:21

It's football season and for me, it’s the most wonderful time of the year. I bleed purple. I’m part of the flock. I have countless NFL licensed items of apparel and jewelry, blankets, banners, baskets and doormats. I know the faces and the names of the coaches and players, the stats and the records, the rules and the refs, the conferences, divisions and announcers. I have stepped on the practice field and had my jersey signed. I am fanatical for football in Baltimore. I’m a fan.

But none of those players, coaches or refs know me. I’ve never put on pads or reported to training camp. When we’re a man down in the final quarter, you won’t find me on the bench yelling ‘put me in, coach!’. You won’t even see me on the sidelines passing out water or drying helmets. Nope, I’ll be home on the sofa with a soda and some spicy wings arguing whether there was a ‘football move’ after the catch to make it a true reception. No Pro Bowl or Hall of Fame for me – just the joy of spectating.

When it comes to Christianity, much of the same is true. I have countless items of apparel and jewelry and home décor with Bible verses and Christian symbols. I’ve read the Book, I know the characters – the Heroes of the Faith, and the villains. I know the stories – when to cheer and when to boo. I know a mountain of fun facts, cultural history, and the various translations. I know ‘the rest of the story’ too – the history of the church after the New Testament. And when it comes to the greatest Superhero of all time, Jesus of Nazareth, I’m also a fanatic – BIG fan!

I was about a year into my Christian walk, voraciously reading the Bible, going to studies, and learning as much as I could about what it is to be a Christian when I had a profound realization: I was a fan. JUST a fan. Like football, I had committed to giving up a few hours on Sundays. I warmed a seat and sang the songs, I cheered and cried, but I wasn’t on the field, in the game. I didn’t serve, didn’t minister, didn’t go and share my faith. I was a ‘hearer of the Word’ but not a ‘do-er’. I figured I’d add in that ‘extra’ stuff later when I had more time. Anyway, I could already see that even my status as just a fan was beginning to make others around me uncomfortable.

Of course, knowing ABOUT the game is nothing like being IN the game. Sitting and watching won’t train you up, improve your skills or make you stretch or sweat. There’s no potential for injury or pain on the sofa. And the difficulty of the rules is lost when you only watch others try to keep them, but never have to develop that skill-set yourself. You only have the casual camaraderie of an audience, not the esprit de corps of a team, working and failing and succeeding together in close quarters. As a spectator, you don’t have to rely on anyone, and no one relies on you. If you don’t show up, the game can still be played.

But Jesus isn’t interested in fans. He doesn’t care how many games you’ve attended or whether you can recite His most famous catchphrases. He wants players. He wants men and women and children suited up in uniform, down on the field running practice drills. Jesus didn’t say, if you love me, buy my merchandise…read my Book…learn all about me. He said, “If you love me, obey my commandments.” John 14:15. … “Follow me and be my disciple,” Jesus said… Mark 2:14. Then he said to the crowd, “If any of you wants to be my follower, you must give up your own way, take up your cross daily, and follow me.” Luke 9:23.

Once I got in the game, everything changed. It was much harder and much better. It forced me to grow and change. It humbled me, it overwhelmed me, it lifted me up, it forced me to be honest with myself, it taught me to love myself, and allowed me to love, forgive and have compassion for others. Those changes didn’t happen until I stepped out and started following Jesus, living my faith – no longer just a fan in the stands.

So now the decisive question is, are YOU a fan or a follower?

See you at game time,

*idea taken from the back cover of the book Not A Fan by Kyle Idleman which I have not read.