Smile, Darn Ya, Smile
If Your Gift is Teaching 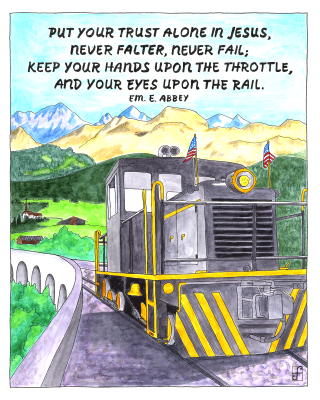 “Be careful, or your hearts will be weighed down with carousing, drunkenness and the anxieties of life, and that day will close on you suddenly like a trap. For it will come on all those who live on the face of the whole earth. Be always on the watch, and pray that you may be able to escape all that is about to happen, and that you may be able to stand before the Son of Man.” Luke 21:34-36

Staying ready and keeping watch can be very challenging. How many of us tried to stay up on Christmas Eve to catch a glimpse of Santa or an elf? Too much excitement along with a sugar crash after one too many cookies most likely ended your stakeout.

It’s easy to get distracted, too. In my desire to use my waiting times wisely, I can get so involved in a project or activity that I forget I was waiting for something else. Thank God for timers and countdown clocks.

Unfortunately, there is no countdown clock or timer setting for Jesus’ return. And just because faithful followers have been waiting nearly 2,000 years doesn’t mean that His return is not now imminent. There are many passages in the Bible that hint at the suddenness with which Jesus will arrive once again:

Be on guard, keep awake. For you do not know when the time will come. It is like a man going on a journey, when he leaves home and puts his servants in charge, each with his work, and commands the doorkeeper to stay awake. Therefore stay awake—for you do not know when the master of the house will come, in the evening, or at midnight, or when the rooster crows, or in the morning— lest he come suddenly and find you asleep. And what I say to you I say to all: Stay awake.”

“Be dressed ready for service and keep your lamps burning, like servants waiting for their master to return from a wedding banquet, so that when he comes and knocks they can immediately open the door for him. It will be good for those servants whose master finds them watching when he comes. Truly I tell you, he will dress himself to serve, will have them recline at the table and will come and wait on them. It will be good for those servants whose master finds them ready, even if he comes in the middle of the night or toward daybreak. But understand this: If the owner of the house had known at what hour the thief was coming, he would not have let his house be broken into. You also must be ready, because the Son of Man will come at an hour when you do not expect him.”

The various warnings that Jesus gives make me a little uneasy. I don’t want to be like those foolish maidens who forgot to bring extra oil and then fell asleep waiting for the Bridegroom. It seems to me it would be all too easy to nod off after hours of vigilance. Or too easy to be living life oblivious to the signs of the times. It’s surprisingly easy to miss warnings and signs. Recently, flying from Seattle to Denver and on to Baltimore we were completely unaware of the weather in Denver. Vacationing, we never gave it a thought. And so, as we approached the airport, it was only after circling southern Wyoming 4 or 5 times that I became aware that something was amiss. Moments later the pilot announced that a big storm had temporarily closed the airport and we might have to land in western Nebraska!

Missing a connecting flight is inconvenient, but missing Jesus is eternally devastating. However, I believe that Jesus told these parables to the crowd, warning those who today we would call unbelievers – people without a relationship with Jesus, without reconciliation with God, without the Holy Spirit living inside them. Those people may be tempted to shrug off the warnings thinking they have plenty of time to ‘get right with God,’ but we know how quickly the end can come, or how your ability to think clearly can be snatched away. Nevertheless, those parables are also a warning to those He left as stewards of his message. Jesus’ return is the closest thing to the ‘end of time’ that we will ever know. It could come at any time. As the joke goes: Jesus is Coming – look busy!

But consider that while we are ‘waiting’ to be reunited with Jesus, we ARE meant to be busy. When it comes to evangelizing the world and taking the Good News to every nation, we – you and me – are Plan A…and there’s no Plan B. We are responsible for guiding the train called ‘Church’ safely to her destination. It’s a big responsibility and we can’t falter or fail. We need to remain vigilant, keeping our hands on the throttle and our eyes on the rail, not leaving any passengers behind, and looking for the important signs and signals along the way.

Blessings in the waiting,