The Shifting Sands of Worry 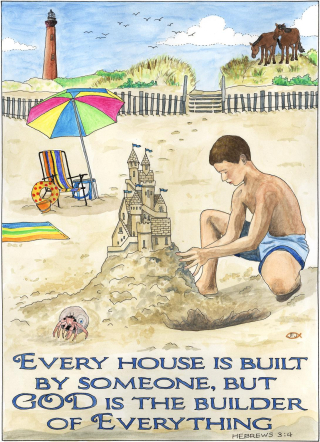 What can you truly trust in this life? Uncertainty and vulnerability are the human condition. History is filled with our struggle to overcome these realities, but what we really create are illusions of security and safety.

Back in the 400’s, Roman citizens were living well. They had high-tech water systems, amazing architecture, an established economy and a well-developed political system. Sure, there was an influx of Goth immigrants that was becoming unmanageable, and rapid climate change brought about by the Late Antique Little Ice Age, but it wasn’t the first time they’d faced those kinds of issues. However, their military, political, and financial power was slowly dwindling. Then, in 476, the Germanic barbarian king Odoacer deposed the last emperor of the Western Roman Empire in Italy, and the Senate sent the imperial insignia to the Byzantine Emperor. Rome fell.

When old Odoacer came storming through, reducing that advanced, beautiful city of Rome to the ruins we visit today, there was no salvation in Jupiter or Apollo, denarii, the Imperial Senate or Oracles. The only salvation possible was in Jesus Christ. In Christ our cares and worries for this life should disappear, and concern for God’s will for His Kingdom take precedent.

Worry is a sin because it is based on the lies of Satan – selfish, prideful lies like, ‘it all depends on you,’ or ‘you have to have this or look like this or live here to be a success,’ ‘what will the neighbors think?’, ‘God isn’t big enough or doesn’t care enough to handle that,’ or worst of all ‘Did God really say…?’. Anxiety and happiness are based on circumstances and situations that we have little actual control over. They make up the emotional roller coaster of building your house on shifting sands. When the tide is low and the sun is shining, happiness rules. But when the tides rise and the storms come, worry prevails.

Joy, however, is built on the rock of the eternal promises of God. Promises like, ‘I will never leave you or forsake you,’ ‘You can do all things through Christ who’ strengthens you,’ ‘God is able to do exceedingly more than we can dare to ask or imagine,’ and ‘He who began a good work in you will be faithful to complete it.’ And let’s not bury the lead: “For God so loved the world that he gave his one and only Son, that whoever believes in him shall not perish but have eternal life.”

Worry can also hide or distract from the will of God in the world and the miracles He’s working. Rome fell and many regarded it as the end of the world. But 1,500 years later we know it wasn’t. After the end of Rome, the Christians who were left behind sought the conversion and education of the pagan tribes. Many of the tribes had no Christian background. Most of the others were Christians in name only. However, in the 500 years following the Fall of Rome, all the new nations of Europe had been Christianized. Some of these converted barbarians became excellent missionaries themselves. The British monk, Patrick, became the missionary to Ireland. Columba, an Irish monk, took the Christian message to Scotland. Boniface took the gospel to the Frisians, and Willibord took it to the Netherlands. Clovis, the king of the barbarian tribe of the Franks, claimed he saw a sign in the sky, and that this sign was from God to assure him he could win a battle in war. He won the battle, and he and three thousand of his warriors professed Christianity at once. This was the first case in history of a whole tribe of barbarians professing Christianity because their king did.

God has given us Revelation, prophesy and promises, but the details are a mystery. We must be careful not to hinder His will for us and the world. We wouldn’t want to be scolded as in Matthew 16:23. “Jesus turned and said to Peter, “Get behind me, Satan! You are a stumbling block to me; you do not have in mind the concerns of God, but merely human concerns.”” Worrying about the future is just a waste of precious time. Read the signs? Yes. Prepare? Yes. Worry and fret? Nope.

As St. Augustine said in a sermon in 410, a Christian’s duty is to pray and to ask God for strength to endure these trials, not spend time lamenting the outcome of God’s mysterious providence.

PRAYER: Yet, not my will, but Yours be done, Lord. Your Kingdom come, Your will be done on Earth as it is in Heaven. Amen!

Blessings of Faith and Trust,