Our Holy Library
Pray Without Ceasing

The Source of All Knowledge 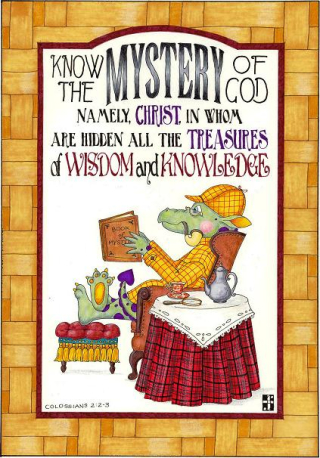 My goal is that they may be encouraged in heart and united in love, so that they may have the full riches of complete understanding, in order that they may know the mystery of God, namely, Christ, in whom are hidden all the treasures of wisdom and knowledge.

Humans are curious creatures. We have an innate desire to know how things work, to understand. My favorite part of parenting was watching my babies interact with their world, and that special moment when the ‘lightbulb’ went on in their head as they figured something out. Sometimes you could almost see the gears turning in their minds. As tiny, diapered scientists, they formed a theory, tested it out and analyzed the results – followed by much repetition if the results were enjoyable (like watching Mommy clean pureed squash off the walls). Later, the endless ‘why’ questions dominated our conversations.

I have always been intrigued by anything called hidden, secret or a mystery. I spent a long time looking for the answer to the biggest mystery: the meaning of life, the universe and everything. I looked to psychology, philosophy, history, law, international studies, literature and art for answers to ‘why are we here?’ ‘what is our purpose?’ and ‘how do we live together in peace and harmony?’ Along the way, I did unearth a few mysteries, or at least things to make me say ‘hmmm’ 🤔.

In the 1950s, Professor of Literature, Joseph Campbell, came up with the idea of a monomyth that re-occurs in myth and folklore throughout the world's cultures. In the monomyth, or Hero’s Journey, a hero ventures forth from the world of common day into a region of supernatural wonder: fabulous forces are there encountered, and a decisive victory is won: the hero comes back from this mysterious adventure with the power to bestow boons on his fellow man.

In 1689, Enlightenment philosopher John Locke wrote about the basic human laws of nature, or fundamental natural rights. It is his philosophy which Thomas Jefferson borrowed in writing the Declaration of Independence which states, “We hold these Truths to be self-evident, that all Men are created equal, that they are endowed by their Creator with certain unalienable Rights, that among these are Life, Liberty, and the Pursuit of Happiness….”

People want to find a Unified Theory of Physics. But they really resist a Unified Theory of Humanity. However, it was in pondering these ideas of universality – a collective unconscious of shared symbology and archetypal characters, a monomyth of a hero’s journey that is retold across varying cultures, and Natural Rights of mankind that are ‘self-evident,’ which set me on the path to God. If these ideas exist, does it mean there is One Universal Truth that applies to all of humanity? If there is one set of Natural Laws, then who established it? Is there a story that is so primal that it lingers in the subconscious of all humans?

Finally, in Christ, it all comes together. The great story of God’s unalienable love for humankind, filled with trees of life, living water, supernatural beings, redemption, transformation and eternal life. An ancient story that was breathed into the spirit of every living person.  There is a reason that for thousands of years humans have been telling the story of Good v. evil. There is a reason even unbelievers feel their consciences recoil from evil. There is a reason that the Gospel story, plainly told, can still break the hardest of hearts.

All of the treasures of wisdom and knowledge are hidden in Christ. The starting point of all fields of study is God. Understand this because the unbelieving world needs to know. People who think they are ‘too smart’ for religion can respond to this. People who attune themselves to the ‘spiritual’ rather than the religious can come to see this. People who deny the existence of God can grasp this. Trace all of human knowledge back to the beginning and you’ll see – HE WAS and HE IS.