The Nails, The Thorns and The Lamb 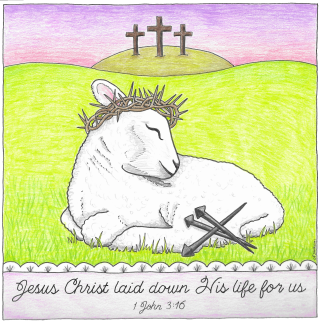 This is how we know what love is: Jesus Christ laid down his life for us. And we ought to lay down our lives for our brothers and sisters.

In the Ladies’ Bible Study we’re doing Max Lucado’s He Chose the Nails for Lent. We’ve done this study before, but the revelations in it are so profound that it bears doing again. Plus, Max Lucado is a supreme storyteller.

I feet moved to share just a bit about the symbols of Easter that I had never considered before.

Nails are meant to bring things together. They are also used to repair broken things. As a carpenter, Jesus undoubtedly had plenty of experience with nails. They were definitely tools of his trade. He spent his young life creating, building and mending. And in a very real way, he finished His life by doing the same thing for the Kingdom of God and all of humanity. Those nails tore his flesh, but as he was suspended between Heaven and earth, the joined them together by making a way for us to get back to God. Those nails repaired our broken relationship with our Father Creator. Those nails built a stairway to Heaven made of His body and blood and faith in Him as our Savior.

Way back in Genesis when Adam and Eve thought it would be fun to be like God, God punished their sin by cursing the ground with thorns so it would be hard for them to get food (Genesis 3:17-19). So right there, thorns became a symbol of the punishment for sin. And remember Myrrh from the Christmas story? It was the spice used for anointing the dead which was harvested from a bush with long thorns. And there, after the terrible scourging, Roman soldiers made a crown of thorns and pressed it into Jesus’ tender flesh. The punishment for sin and symbol of death’s anointing turned into an ironic acknowledgment that Christ, the truest King of the Jews would take all the punishment for the entire world’s sin on His head until His death.

In the agrarian societies of the Biblical lands lamb and sheep were a major source of nourishment. But of course, you had to raise it and care for it before it could be dinner. Later, the lamb became a symbol of sacrifice: first, when Abraham was about to sacrifice his only son for God and the sheep appeared, then later at the very first Passover when God commanded His people to sacrifice an unblemished lamb and use its blood to cover their doorways so that they would be saved from Death. Eventually, Jesus became the unblemished Lamb of God, who takes away the sins of the world. How this works is a mystery, but there is a recurring pattern of God’s transforming work in our lives: that some form of death always precedes new life – and death never has the last word. Jesus, the unblemished, sinless lamb of God gave up His life in this world so that we could have life in the world to come. When we crucify our old, worldly ways to the cross daily, we die to sin so that we can live for and in Christ. We feed on the body of Christ at communion to be spiritually nourished and strengthened for the days ahead, just as the Jews feasted on their Passover lamb to be strengthened for their journey out of Egypt and out of slavery to sin and live fully as God’s special, holy nation.

No longer will there be any curse. The throne of God and of the Lamb will be in the city, and his servants will serve him. They will see his face, and his name will be on their foreheads.

I have no doubt that God used all of these symbols and more in all of these ways, and more, to show us and tell us the most important thing that we could ever know: That God so loved the world that he gave his one and only Son, that whoever believes in him shall not perish but have eternal life. -- John 3:16

Wishing you a Blessed Resurrection Day,