The Five Kings of Christmas 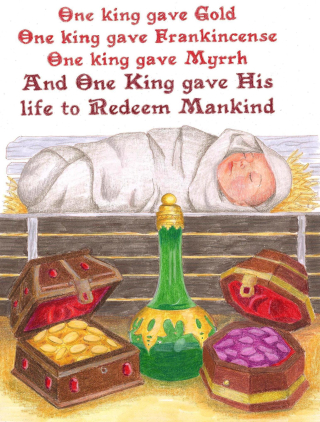 as born in Bethlehem of Juda, in the days of king Herod, lo! astrologers [lo! kings, or wise men,] came from the east to Jerusalem, and said [saying], Where is he, that is born [the] king of Jews? for we have seen his star in the east, and we have come to worship him.

Five Kings? But the Bible says there were three! Does it? Actually, we don’t really know how many Magi there were, just that they brought at least three gifts.  But nevertheless, assuming there were three, the Bible is very clear about the other two as well.

The first king is Herod, in title, the king of the Jews. There was all kind of controversy surrounding Herod and his rule. For one thing, he had collaborated with Mark Anthony and the Romans in their conquest of Judea. The Romans allowed him to rule over his people with whatever authority was left over. And here’s the other problem: Herod was not Judean. He was from Idumea (Edom), with its capital in Petra in what is now Jordan. He was ethnically an Arab whose family had converted to Judaism. And he installed High Priests who were also converts from other places. This, along with his lifestyle of debauchery made him an illegitimate king to the Pharisees and to many Jews. There is no question that he would have felt threatened by any challenge to his rule – in fact, he murdered his mother- and brother-in-law for that reason. With his extravagant lifestyle and expensive building projects paid for by unbearable taxes to solidify his power and status, Herod exemplifies worldly rulers.

The ‘three kings’ were probably not kings at all, but Magi, or wise men, highly educated and skilled in reading the stars and interpreting omens. They consulted with kings and were ‘king makers’ using their skills to ‘read the future.’ They had read all the prophesies of the various religions and had maps of the stars. This was their ‘science.’ And when, one special day, a new star appeared that was not on any map, they were wise enough to realize something amazing and important was happening. Perhaps more importantly, they were willing to act on that belief. Preparing, packing up a caravan, and heading out for a long journey west with expensive gifts took perhaps two years or more. Their gifts represent their understanding of just who the Messiah was destined to be. Gold for a King, because Messiah would be born King of the Jews, and all mankind. Frankincense for a Priest, because Messiah would be the Great High Priest who would intercede between mankind and God Almighty. Myrrh for burial, because Messiah would not be just the Priest, but also the sacrifice that would take away the sins of the world. With their study and watching, and understanding of who Messiah would be, the Wise Kings exemplify seekers who, when they find the Truth, follow hard after it, despite the hardship, to worship God.

THE ONE TRUE KING:

Many Jews expected the Messiah to come and establish the Kingdom of God in Jerusalem and send the Romans packing. They longed for a righteous king to grant them freedom. Sadly, many missed the opportunity for True freedom that Jesus brought. In this world there will always be troubles, sadness, tragedies. God’s kingdom is not of this world, and the peace and freedom Jesus brought are also not of this world, they are grace and mercy that transcend our worldly cares. But a day is coming soon when Jesus will return, not as a babe, meek and mild in a lowly manger, but as the rightful King of Kings and Lord of Lords. Now, he is our friend, our comforter, a peacemaker, a healer and a teacher. But when He comes again, He will bring the sword of God’s Justice and Truth. Check out Revelation 19:11-16 for a better description. The baby in the manger is easy to love, the passionate young rabbi who heals and speaks in parables about the kingdom of God is easy to follow. But we should never forget that He is yet a Mighty King, the Ruler of all Creation, who is Holy and Blameless. The sin of our world saddens, offends and angers Him. And one day He will come to bring God’s perfect justice and wipe away all evil. He came down to us, laying aside all His crowns and glory, becoming a sacrifice, paying our debt, just so we could be welcomed into such a wonderful place as that – the Kingdom of God, Heaven on earth.

They will wage war against the Lamb, but the Lamb will triumph over them because he is Lord of lords and King of kings—and with him will be his called, chosen and faithful followers.” ~Revelation 17:14