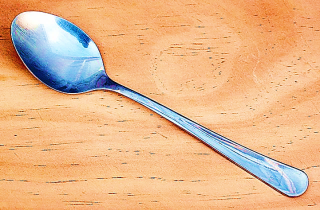 Once upon a time there was a spoon. The silver smith put his mark on it and finished polishing it, adding it to the box as the last piece in the silverware set to be sent to the palace for the king. There the spoon was useful, being taken out and polished regularly to adorn the table at fancy parties and dinners for heads of state. Over time the spoon was nicked and taken out of rotation. It sat unused for the longest time. At last, one day it was grabbed by the king’s small niece who took it out into the garden to serve tea to her dolls. As she was cleaning up, she dropped the spoon by the vegetable garden. There it lay in the sun and rain until the gardener spotted it one day. Since it was tarnished and nicked, he used it to dig out stubborn weeds from around the lettuces. As winter came on the spoon ended up in the garden shed. There it sat, blackened and bent, until one day a youth spotted it and took a closer look. Using his apron, he rubbed the spoon until its silver began glow. Putting it in his pocket he decided to make a gift of it to his pregnant wife. By the fire in their tiny home, the youth applied polish and rubbed and worked until the spoon was nearly like new. On Christmas morning he presented it as the first gift to his newborn son. After feeding two generations of that family, it was once again consigned to tarnish in a drawer, where one day, not recognizing its worth, it was put in a bin to be donated to charity. It found new life at the jail, feeding those who were justly and unjustly imprisoned, including an old silver smith - a Christ-follower who refused to renounce his faith. As he turned the spoon over, he smiled, recognizing his own makers’ mark, and bowed his head to thank God for His provision, even in jail.

For the eyes of the Lord range throughout the earth to strengthen those whose hearts are fully committed to him.  ̶  2 Chronicles 16:9

We are that spoon. We are no longer our own because we have been bought at a price. So, whether our calling is ‘high’ such as serving a king, or ‘low’ such as serving a prisoner, either way we are serving the Lord. Over the course of our lives, we may be used in many different ways. Sometimes we may be called to use our expert talents, and sometimes we may be just an extra set of hands. But in any case, we yield our will, our hopes and our desires to the will of the Master. Daily, we must choose to be used by God in whatever capacity He needs. We cannot see the big picture. We may never know, on this side of Heaven, what our obedience resulted in. Our job is simply to trust the Lord with our lives and to do His good will, carrying out the good deeds He prepared in advance for us.

Although ‘living for the Lord and yielding our will’ is a simple concept, living it out day by day is very challenging. Daily, we need to crucify our ego and will and pick up our cross to follow Jesus. It’s hard to be inconvenienced for the Lord, to give up our money and ‘stuff’, to be available when needed, to be unappreciated by others, to be persecuted or mocked. It’s even harder when we can’t see the point or know what the plan is. But this is what we are called to. Myself, I wonder almost hourly if I’m up to it. I fail more than I succeed, but I succeed more than I used to, and there is evidence of progress.

PRAYER: Make me a tool in the Master’s hand, and let me never desire to be anything more. Amen.