You'd Better Be Good
Love Came Down at Christmas 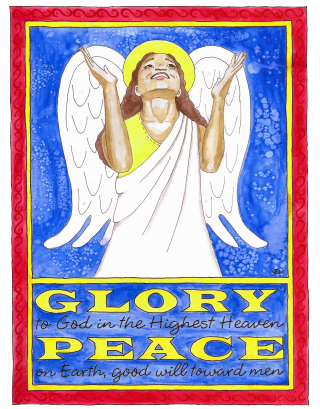 “I am leaving you with a gift—peace of mind and heart. And the peace I give is a gift the world cannot give. So don’t be troubled or afraid.  ~John 14:27

Peace. Isn’t that what we all want? So much so that it’s become a trope answer at beauty pageants. So much so that we’ve invented symbols for it: ✌🕊☮. So much so that people are moved to make signs and go stand on street corners and in front of government buildings to demand it.

And yet… The history of the world is war, as my hubby often says. And despite the empires, kingdoms and warring tribes of antiquity, the 20th century was by all accounts the bloodiest, war-fill century of all time.

As an international history major in college, I pondered this A LOT. I was also studying political science and there were a lot of philosophers and politicians espousing ideas of various kinds of utopias if only we could educate the populace and give up outdated ideas of culture and religion. The cognitive dissonance was deafening.

the state of having inconsistent thoughts, beliefs, or attitudes, especially as relating to behavioral decisions and attitude change.

We are now living in a time when more people on the planet can read than at any other time in history. Even ordinary people in impoverished countries have some access to the internet and its limitless information on history, psychology, philosophy and politics. My point is that if the spread of worldly knowledge and the destruction of religion and culturally accepted morality were going to lead to Utopia, then we should be experiencing that now. Peace should be reigning as we all acknowledge and accept that there is plenty of room, food, water, medicine, money, mates, resources and everything else for everyone on the planet if we only freely share and distribute it properly and compassionately. Are you chuckling yet? Scoffing? Feeling depressed? Me too.

I think this was all part of God’s plan to lead me to Him. Perhaps it’s His method for leading a lot of people to Him. The peace the world gives is temporary treaties and negotiated deals that are all too easily broken when it suits a leader, a country, a movement. It's unsatisfactory and unsatisfying. The peace the world gives ends a war, but it doesn’t mend hearts, fix brokenness or soothe a soul. That kind of peace is only found in Jesus.

When Jesus arrived, He came into a war-filled world. The heroic Maccabees had retaken Israel from the Greeks a few hundred years earlier (that’s what Hanukkah is all about) The Jewish faith had broken into four different sects which vied for power leaving them vulnerable. The Romans conquered the Greeks and then rolled into Israel. A non-Jewish king, Herod, claimed an illegitimate throne by ingratiating himself to the Romans. Up in Galilee where Jesus’ family was from, insurgent terrorists – the Zealots – were harassing the Roman invaders in the name of God. The expectation was that Messiah would arrive and finally bring peace to His people, if not the world.

Mankind today still expects this. Luke 2:14 has been misunderstood for centuries. The King James version reads: “Glory to God in the highest, and on earth peace, good will toward men” which sounds like a promise to the world that God has decreed world peace and good will amongst mankind. When I was a kid that’s definitely what I took it to mean. And there was the cognitive dissonance again. 2,000 years ago, God declared peace on earth, but where was it? Certainly not in Vietnam, certainly not in the Middle East, certainly not between the USSR and USA. It made me skeptical of God’s word.

Later, I read it in the New International Version: “Glory to God in the highest heaven, and on earth peace to those on whom his favor rests.” Hmmm. Much more specific. Not world peace, but peace to individuals. This is not the peace the world promises with treaties and laws and military build-ups. This is the inner peace of knowing that no matter how crazy and tragic the story gets, there WILL be a happy ending. No need to panic, the war has been won, the battles have been decided, the Good Guy wins and rules in perfect justice and love forever. That really is GOOD NEWS!

If our focus this Advent season is on tragedy, on the news, on world affairs, on social media, on frustrated friends’ and family’s rants, even on our own personal tragedies, then we will have no peace. Fear will invade bringing along anxiety, sadness, depression and anger. But if we can force ourselves to focus on Jesus, the emblem of God’s promise of the happiest of endings, we can live in peace. Our bubble of joy and hope, love and peace will repel the anger of the world, it will protect us from toxic attitudes and behaviors. It will not save us from hardship or persecution, but it will determine how we move forward in spite of them.

“So don’t be troubled or afraid.” Our happy ending is assured. As certain as that Hallmark Movie kiss at 1h59m, Jesus has overcome the world – He’s on His way back, and He’s coming for you!