Let Us Be Thankful 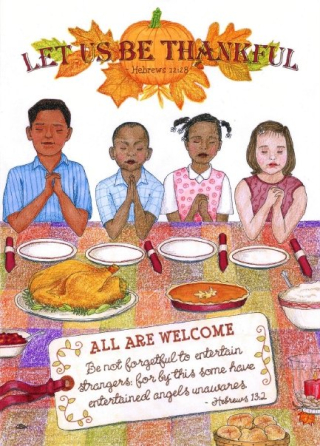 Don’t forget to show hospitality to strangers, for some who have done this have entertained angels without realizing it! ~Hebrews 13:2

As Thanksgiving approaches, I think it's appropriate to consider our many blessings. We truly live in one of the richest countries in the world, and although we still have many who are food insecure and living paycheck to paycheck or are dependent on social services, even our poorest are better off and more cared for than most people in the world today.

Most Americans are in the top 10% of worldwide wealth.  According to CNBC, “To be among the top 10 percent worldwide, you don’t even need six figures: A net worth of $93,170 will do it.

Here is what world poverty looks like, in numbers:

The most basic needs that we take for granted: security, literacy, electricity, clean water, availability of medicine and health services, access to banking, and adequate food, are major issues for most of the world’s people.  While we argue over how to pay for and adequately deliver these necessities to our population, many countries simply don’t provide them.

And yet, as essential as these basic physical needs are, their need for Jesus is even greater. Food and water will save their body, but only Jesus can save their soul. And we are abundantly blessed to be able to address all their needs. Missionaries, aid organizations like UMCOR, Samaritan’s Purse, Compassion International, World Vision, Bread for the World and many others take Jesus’ hands and feet and saving message of Grace all over the world to every tribe and every nation. The needs are great, and the cost is greater still.

Even in our great country, so abundantly blessed with wealth and ‘stuff,’ we face a spiritual desert. For many Americans, especially young adults, faith is not a concern.

Americans' membership in houses of worship continued to decline last year, dropping below 50% for the first time in Gallup's eight-decade trend. In 2020, 47% of Americans said they belonged to a church, synagogue or mosque, down from 50% in 2018 and 70% in 1999.

U.S. church membership was 73% when Gallup first measured it in 1937 and remained near 70% for the next six decades, before beginning a steady decline around the turn of the 21st century.

The decline in church membership is primarily a function of the increasing number of Americans who express no religious preference. Over the past two decades, the percentage of Americans who do not identify with any religion has grown from 8% in 1998-2000 to 13% in 2008-2010 and 21% over the past three years.

So, as we give grateful, unending thanks to our Creator and Almighty Father for the many blessings in our lives, let us also consider how to share those blessings with those who have such great needs. How can we serve God by serving others? How can we bring life-saving food, medicine and infrastructure to poverty-stricken areas? How can we bring the soul-saving message of Jesus’ work on the cross to generations without faith? We have what they need, let us open our hands and hearts to share generously.

She extends a helping hand to the poor and opens her arms to the needy.