One Bread, One Body
Dry Bones

The Days of Noah 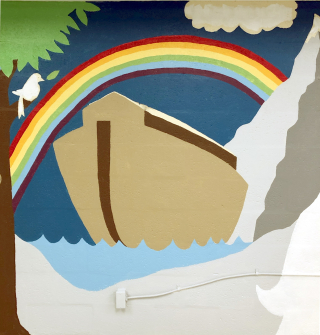 The Lord saw how great the wickedness of the human race had become on the earth, and that every inclination of the thoughts of the human heart was only evil all the time. But Noah found favor in the eyes of the Lord. –Genesis 6:5,8

A few weeks ago, events at church started up and I got to see friends face to face that I hadn’t seen in over a year. We met once again to do the business of Our Father, studying His word, supporting mission work and serving His people. And in chatting afterward, as I am prone to do, one topic repeatedly surfaced: how different and unrecognizable this world seems to us these days.

I’d like to say that selfishness, violence, lawlessness, challenging authority of all kinds and general godlessness are a new phenomenon, but if you know history or have read the Bible, you’re well aware that they are not. As I was painting the above mural, which is still not quite finished, I took time to meditate a bit on the days of Noah:

Now the earth was corrupt in God’s sight and was full of violence.  God saw how corrupt the earth had become, for all the people on earth had corrupted their ways.

It makes me wonder what those ancient people had gotten up to. Whatever it was, I can guarantee you this: our current world is worse. Of course, it isn’t a contest, and even the tiniest of sins is offensive to God and disqualifies us for Heaven.

Back then, God redeemed and purified His creation with rain and a flood after saving the one righteous family left on earth – a precursor to Baptism.  His rainbow was the symbol of His covenant to never again destroy us by flood. Our relationship with God changed on that day. Sin is still a problem, but God also vowed to have compassion.  In Isaiah 54:8-10 the LORD says:

8 In a surge of anger
I hid my face from you for a moment,
but with everlasting kindness
I will have compassion on you,”
says the Lord your Redeemer.

9 “To me this is like the days of Noah,
when I swore that the waters of Noah would never again cover the earth.
So now I have sworn not to be angry with you,
never to rebuke you again.
10 Though the mountains be shaken
and the hills be removed,
yet my unfailing love for you will not be shaken
nor my covenant of peace be removed,”
says the Lord, who has compassion on you.

Of course, despite the compassion, mankind still sinned. It was clear that we needed much more divine intervention – we needed Jesus: his sacrifice and his resurrection.

For Christ also suffered once for sins, the righteous for the unrighteous, to bring you to God. He was put to death in the body but made alive in the Spirit. After being made alive, he went and made proclamation to the imprisoned spirits— to those who were disobedient long ago when God waited patiently in the days of Noah while the ark was being built. In it only a few people, eight in all, were saved through water, and this water symbolizes baptism that now saves you also—not the removal of dirt from the body but the pledge of a clear conscience toward God. It saves you by the resurrection of Jesus Christ.... --Peter 3:18-21

Now, as Christians baptized in water and the Holy Spirit, we wait again in times like the days of Noah. Again, God is patient, but an end is coming when Jesus will return to this earth once more.

“Therefore keep watch, because you do not know on what day your Lord will come."

We really shouldn’t waste a moment’s time bemoaning or worrying about the current state of world affairs. That is all in God’s capable hands anyway. It seems to me that prudent Christians should be keeping watch. Are we keeping our lamps trimmed and burning? Are we seeing the signs of the times? If these are days are like the days of Noah, then the time is very short to rescue as many as possible before it’s too late. There are so many to reach, so many conversations to be had, so many relationships to build.

Even in the darkest days, the Lord is always at work looking for those ready to do His will and to pray without ceasing (2 Chronicles 16:9). I want to find favor in His eyes.