Why Me?
The Days of Noah

One Bread, One Body 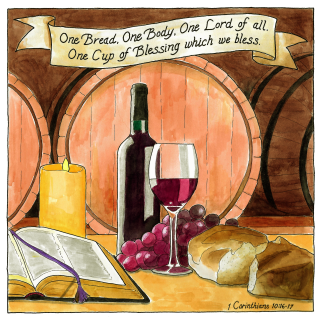 When I was a child, I remember hearing my Mother say “I don’t want to be pigeon-holed! I’m not a ‘joiner,’ I’m just ME.” Now, if you had known my Mom, you would immediately know that this was a very true statement, although it would have been hard to put her in any one category anyway – she was quite unique.

I have been surprised by all the categories, labels and pigeon-holes people seem happy to put themselves in these days: black, white, brown, gay, straight, trans, left, right, extremist, moderate, haves, have-nots, and all kinds of ethnic groups, religions and denominations…. This doesn’t even scratch the surface of identity based on where one lives, what one does for a living or what one enjoys as a hobby or one’s familial status.  I’ve been pondering this quite a bit lately because something about it strikes me as unhealthy.

I can definitely see that in a world set on a shaky post 9/11 foundation of violence and terrorism and other scary news, some true sense of security can be found in establishing an identity for oneself. I can also see that in a world where families are falling apart and people move around a lot, a sense of community can also be found in these identities. In those ways the labels might be beneficial. But I fear that they also can become limiting. It’s so tempting to believe that everyone in your little ‘box’ is like you, and everyone outside can’t or won’t understand and are too different. It becomes ‘us’ and ‘them’ instead of ‘we.’

As Christians, however, our identity is always in Christ. In Christ, although we are many, we are one body. Paul summed it up excellently:

The human body has many parts, but the many parts make up one whole body. So it is with the body of Christ. Some of us are Jews, some are Gentiles, some are slaves, and some are free. But we have all been baptized into one body by one Spirit, and we all share the same Spirit. ~1 Corinthians 12:12-13

In Christ, we represent the diversity of the entire world. According to Wikipedia, as of the year 2020, Christianity had approximately 2.5 billion adherents out of a worldwide population of about 7.8 billion people. It represents nearly one-third of the world's population and is the largest religion in the world. And we’re all over – there are Christians in nearly every country of the world. As of September 2020, the full Bible has been translated into 704 languages, the New Testament has been translated into an additional 1,551 languages and Bible portions or stories into 1,160 other languages.

Despite critics who are happy to tell you otherwise, for 2021 years there has been an unbroken family-line of faith connecting us with believers from empires, kingdoms, nations and multitudes of ethnic groups. The discovery of the Dead Sea Scrolls in Qumran in 1947 were proof that our translations of the Bible remained faithful to the original over thousands of years. A reading of Martin Luther’s Commentary on the Book of Romans from 1515 shows that our modern understanding of God’s Word has not altered significantly in over 500 years. Governments changed, borders changed, people groups migrated and were conquered, but the Word of God and the Good News of Jesus Christ have never changed and never will change.

If we, as one body of believers, turn our eyes away from this modern world with its greed, rivalries, and lust for power and influence, and instead focus on following Jesus and living out the Word of God, we will soon see that there is so much more that binds us together than anything that could pull us apart. Whatever other identities we may possess, we are first and foremost Children of God. And that makes us all Brothers and Sisters in Christ. This is no small thing. We hold eternity in our hearts (Ecclesiastes 3:11).  We carry the Holy Spirit in our body (2 Timothy 1:14). We are citizens of Heaven (Philippians 3:20).

You are a chosen people, a royal priesthood, a holy nation, God’s special possession, that you may declare the praises of him who called you out of darkness into his wonderful light. Once you were not a people, but now you are the people of God; once you had not received mercy, but now you have received mercy. ~1 Peter 2:9-10

Every time we take the cup and break the bread at the Communion Table, we are joining with billions all over the world today, and millions throughout history whose faith caused them to give up their own desires and dreams for their lives, lay them at the foot of the cross and follow Jesus. It was a daring faith in 30AD, a daring faith in 1515AD and it’s a daring faith in 2021AD. But we are not alone!

Peace be with you,