Kind Words Are Like Honey
My Light and My Salvation

Joy Comes With the Morning 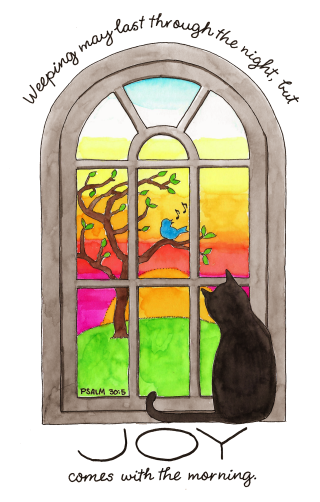 Sing the praises of the Lord, you his faithful people;
praise his holy name.
For his anger lasts only a moment,
but his favor lasts a lifetime;
weeping may stay for the night,
but rejoicing comes in the morning.
~Psalm 30:4-5

“Hang On, Baby, Friday’s Comin’!” Do you remember that iconic 70’s poster with the kitten clinging to a branch? We all know what it’s like to hang on, hang in, keep it together just a bit longer because relief is on the way. Often it seems so much easier to keep on keeping on when the end is in sight. That burst of energy you get when you see the finish line coming up. Or for me, the final hard push when I can see I’m almost to the scenic panorama at the end of hike. I’m always amazed at how much there is ‘left in the tank’ when I think I’ve pushed myself to my limits. Truly, hanging on a bit longer is possible.

But what about when the end is NOT in sight? How many hikes have I been on when I kept telling myself the mountaintop was just around this next bend, only it wasn’t. Nor the next one or the one after that either. Is this the right trail? Should I check the map? Should I just call it quits and go back?

In the Bible, God frequently calls His followers to step out in faith with no clue as to what will happen, only that the result will be good. Abraham and Isaac, Moses and the Red Sea, Joshua and the Jordan River, Gideon, Virgin Mary, Peter and those fishing nets… It takes a lot of faith to trust God for a happy ending when everything looks mighty desperate or downright impossible. But I have seen the impossible become possible more than a few times. God can make a way when there seems to be no way. And in my experience, the outcome is more unexpected and better than anything I could have planned.

Here are a few stories of God’s goodness to us when we were desperate and helpless but hopeful:

Weeping may last for the night, but JOY comes in the morning. Enduring is hard. Not knowing is hard. Trusting is hard. And all the endings aren’t happy ones. But God has an amazing, supernatural way of weaving together the broken pieces of hopes and dreams and making a newer, better reality with them. He may turn you down a different path, a longer path, perhaps a harder path, but in the end, the destination will surpass what you had planned.

I’ve seen it with my own eyes. These are just a few of the stories. “All I have needed His hand has provided.” His faithfulness has been Great. And because I am sure of this down to my bones, I am also sure that He will work all things to our good in our future. I am not adventurous, I’m not a risk taker. I’m a planner, measuring out the cost/benefit of every situation before I make a move. Trusting my future to God with no clue how it will turn out is a challenge. But then I remember that, doing a cost/benefit analysis, what cost would ever be too much in doing God’s will? Jesus paid it all, all to Him I owe. And what benefit could there ever be that would be better than the plans Almighty God has for me – plans to prosper me and give me hope and a future? There’s a bet you can’t lose! God wants to bless us more than we want to be blessed – more than we could dare to ask or imagine!

I am really surprised by the quality of your constant posts.You really are a genius, I feel blessed to be a regular reader of such a blog Thanks so much..I’m really enjoying the design and layout of your site. It’s a very easy on the eyes which makes it much more pleasant for me to come here and visit more often. Did you hire out a designer to create your theme? Excellent work!