Make Lemonade
He Lifted Them Up and Carried Them

One Nation Under God 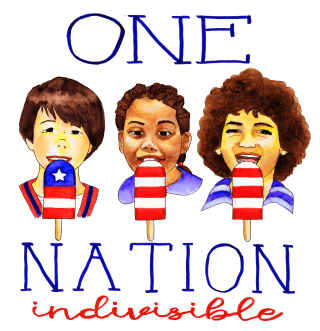 I hope you will indulge me just a bit because this all came together in a way that makes me believe it is straight from the Lord.

Last year I made this illustration. Those are real kids with whom I went to school, and the reference photos were all taken around 1976. Now last month I was feeling the need to get a little funky, so I created a YouTube playlist of Stevie Wonder songs. And I heard the song “Black Man” from the album “Songs in the Key of Life” for the first time. This song was written in 1976 for the Bicentennial. I’ve listed the lyrics below but give a listen because it is one funky jam.

The song recognizes the achievements of men and women of various racial backgrounds for their contribution to our glorious country. What particularly struck me was how many of the people mentioned I had never heard of or knew little about. It surprised me because my generation was bathed in messages of unity. We were teaching the world to sing in perfect harmony with a Coke and a smile. Sesame street was fully integrated. Even the colors of Benetton were united. But history still belonged to the Great Men.

Perhaps there’s a lesson in that for us now. In the Bible, Old Testament and New, God continuously reminded His people to care for the ‘other’: the widow, the orphan, the foreigner, the poor. Over thousands of years God kept sending the message that His world was made for all men (and women) and yet we didn’t seem to grasp it. Maybe every generation has to re-learn this message. Personally, I’m fine with that. It’s a great message. It’s THE Christian message. Others may try to co-opt it or twist it to fit some new-fangled ideology. Don’t scoff or mock, just tell the next generation the truth: the enemy is never people, the enemy is sin and sinfulness. The only identity that really matters is the identity we have in Christ! Red or yellow, black or white all are precious in His sight. We are One Nation of humanity, Under God, Indivisible!

by Stevie Wonder and Gary Byrd

We pledge allegiance all our lives to the magic colors, red, blue and white.

But we all must be given the liberty that we defend,

for with justice not for all men History will repeat again

It's time we learned this World Was Made for All Men

Now I know that the birthday of a nation Is a time when a country celebrates,

But as your hand touches your heart, remember we all played a part in America

to help that banner wave.

It's time we learned this World Was Made for All Men.

God saved His world for all men: All people, All babies, All children, All colors, All races, This world's for you and me.

(call and response with children)

Who was the first man to set foot on the North Pole? Matthew Henson - a black man

Who was the first American to show the Pilgrims at Plymouth the secrets of survival in the new world? Squanto - a red man

Who was the soldier of Company G who won high honors for his courage and heroism in World War I? Sing Lee - a yellow man

Who was the founder of blood plasma and the director of the Red Cross blood bank? Dr. Charles Drew - a black man

Who was the great American heroine who aided the Lewis and Clark expedition? Sacajawea - a red woman

Who was the famous educator and semanticist who made outstanding contributions to education in America? Hayakawa - a yellow man

Who invented the world's first stop light and the gas mask? Garrett Morgan - a black man

Who was the American surgeon who was one of the founders of neurosurgery? Harvey William Cushing - a white man

Who was the man who helped design the nation’s capital, made the first clock to give time in America and wrote the first almanac? Benjamin Banneker - a black man

Who was the legendary hero who helped establish the League of Iroquois? Hiawatha - a red man

Who was the leader of the first microbiotic center in America? Michio Kushi- a yellow man

Who was the founder of the city of Chicago in 1772? Jean Baptiste - a black man

Who was one of the organizers of the American Indian Movement? Denis Banks - a red man

Who was the Jewish financier who raised funds to sponsor Christopher Columbus' voyage to America? Luis de Santángel - a white man

Who was the woman who led countless slaves to freedom on the underground railroad? Harriet Tubman - a black woman

Blessings of Freedom to all,