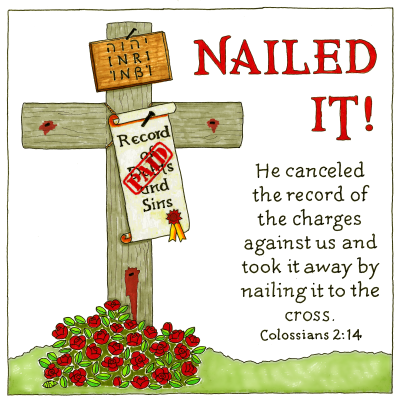 Jesus replied, “Very truly I tell you, everyone who sins is a slave to sin. Now a slave has no permanent place in the family, but a son belongs to it forever. So if the Son sets you free, you will be free indeed. -John 8:34-36

My pastor gave a sermon a couple of weeks ago in which he noted that the more convinced we are that we are wretched sinners in need of a Savior, the more we will serve Jesus with the passion of our lives. Luke 7:47 says “Therefore, I tell you, her many sins have been forgiven—as her great love has shown. But whoever has been forgiven little loves little.”

In our modern culture I wonder if we appreciate how serious sin truly is. Since the beginning of God’s law, mankind has been pushing back, re-interpreting and just plain fooling ourselves that we didn’t hear God quite right. Adam and Eve and that apple, Korah and his upstart followers, David and Bathsheba, Ananias and Sapphira and the lie about their gift. The world reads those stories and their take-away is that a ‘loving’ God would never be so harsh and full of wrath. God must be a narcissistic megalomaniac to demand such strict adherence to his Word, especially knowing full well that humans are natural sinners. Perhaps you’ve had that thought yourself? I know I’ve wrestled with it.

Here are a few points to ponder as you wrestle with the holiness of God and the seriousness of sin:

First of all, God is God and we are not.  in Isaiah 55:9 God says, “As the heavens are higher than the earth, so are my ways higher than your ways and my thoughts than your thoughts.” Proverbs 30:3-4 reiterates this from the human perspective:

I have not learned wisdom,
nor have I attained to the knowledge of the Holy One.
Who has gone up to heaven and come down?
Whose hands have gathered up the wind?
Who has wrapped up the waters in a cloak?
Who has established all the ends of the earth?
What is his name, and what is the name of his son?
Surely you know!

It is unimaginably presumptuous for any human to think that we could even begin to understand God or His ways with the 3 pounds of gray matter in our skulls. God is omnipotent, omniscient, omnipresent and eternal. He somehow created everything out of nothing. He is waaaay too big and all-everything to even be conceptualized by us. In many ways it’s like trying to teach algebra to your dog. Algebra exists and its principles describe aspects of your dog’s life, but it will never be understood by your dog. However, out of His love for us and desire for relationship, He has revealed some things to us. He has placed eternity in our hearts. He has given us a conscience which understands the concept of right and wrong although we are free to override it. And He has spoken to some of us and in that way given us the Holy Scriptures containing everything we need to live our best lives. Who but the Inventor could really know that anyway? Yet from the beginning of time until now we have been trying to ‘backwards engineer’ humanity and work God right out of the equation. It’s as foolish as removing the batteries and expecting the gadget to operate properly.

Secondly, God is immutable - unchanging and unchangeable, and that quality is also true for His Holiness. Holiness is the perfection, or wholeness of God. It is a state of being. Instead of viewing holiness as God’s Law - as a set of arbitrary ‘rules’ which could be adjusted by the Author, I suggest that it is better to view holiness the way we view Scientific Law – a set of rules that describe reality in a true, universal and absolute way which are discovered rather than invented.  Isn’t it odd that we readily accept Scientific Law but so often challenge God’s Law? In Sunday School I use the analogy of space to demonstrate this concept. ‘No man may come to the Father except through Me’ has been scorned as highly intolerant for centuries. Yet, consider this statement, ‘No man may get to the moon except with a spacesuit.’ Who would challenge that? That is not an intolerant statement barring those without spacesuits from access to the moon. It is also not a statement that overlooks or rules out other valid ways of getting to the moon. Rather it is a mere statement of fact based on unchangeable Laws of Science that describe reality in a true, universal and absolute way. Heaven cannot contain even the tiniest amount of sin. The only method for sinners to enter Heaven, therefore, is to be covered by the sinless blood of Jesus. Why? I don’t know. It just is. Why is the universe expanding faster and faster rather than slowing or contracting? I don’t know. It just is.

Finally, sin is death. Sin isn’t ‘like’ death, sin IS death. It is the thing that ended immortality in the Garden and gave us a life-expectancy. As sin increased, so did disease, war, hatred and everything that is not Good. Sin is highly corrosive and highly contagious. The more it eats away at us and spreads amongst us all over our world, the more evil there is, because evil is the absence of Good. Sin opposes, corrupts, condemns and seeks to destroy Good. God is Good. And sin opposes and seeks to destroy God. It’s difficult to see how a lie here or there, a little bit of cheating or stealing, some pre-marital fun or exploring other religions could make us enemies of God. But those are evidence of our sin condition, a condition that eats away at our soul, turning us away from God and Good, making us slaves to our own pride and pleasure. The only way to regain ‘Goodness’ was to buy us back - redeem us from slavery to sin. And that is what Christ has done. Sin held us hostage, but He ransomed us with His sinless blood. He paid off our ransom and debt and nailed it to the cross, marked ‘paid in full’ for all in Heaven and earth to see. We’ve been bought at a price – a very high price. Why was that the only way? I don’t know. I don’t claim to understand it, but I believe it.

Father, forgive us, for truly, we know not what we’ve done. Amen.

what a great blog, thanks for posting this cool article. Thanks again.