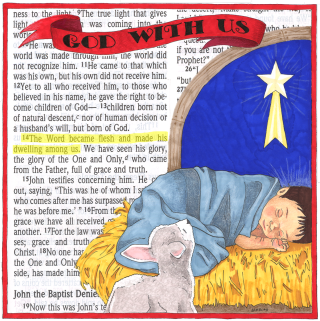 The Word became flesh and made his dwelling among us. We have seen his glory, the glory of the one and only Son, who came from the Father, full of grace and truth.

Imagine an all-powerful, all-knowing, immortal God who created everything that is, deciding to come to earth in the form of one of His created beings. Is He here to dazzle us with his powers? Nope. In fact, He willingly gave up his powers while on earth. Did He come to seduce women or battle heroes to boost His ego? Nope. In fact, He came to rescue us from such abusers. Did He come to make trouble for His own amusement, mocking pathetic humans and their imperfect ways? Nope, unlike so many Greek and Roman gods, He came not to mock our sinfulness, but to cleanse us from it, having compassion on us and the pain we suffer because of sin in the world - ours and others'.

God on earth would certainly have been entitled to riches, palaces, choirs praising him around the clock, all people bowing before him in fear and awe and with a temendous army at his command. In fact, that is exactly how Caesar Augustus lived at the time Jesus was born. He was know throughout the Roman Empire as the king of kings, the lord of lords and the bringer of the Pax Romana...the Roman Peace. Choirs DID sing his praise and his birthday was celebrated as a massive multi-day nationwide holiday.

Meanwhile, the God of all creation, the One who spoke and created the universe, arrived as a tiny, helpless infant in a lowly stable full of dirty animals, wrapped in rags and laid in a feeding trough. But there was a choir...of all the angels in Heaven. There were people falling to their knees in awe and wonder, singing of the great power and mercy of God. Later, highly respected dignitaries from the east arrived with riches of gold, spices and incense to pay their hommage.

The Bible tells us that His mother, Mary, treasured these things in her heart and pondered them. This was certainly an unusual event, filled with angelic visitations, supernatural pregnancies, and unexpected visitors of all kinds. But these are what we can expect when God shows up. He came to earth to live with us, sweat with us, cry with us, be outraged at injustice with us, laugh with us, party with us, and teach us His Father's plan for our lives and our salvation.  A salvation to adopt us into the family of God, to make us fit for Heaven, and to remove the stain of sin from our souls and fill us with the spirit of God.  Why? Why would He do such a thing? The answer is as surprizing as it is simple: Love. God so loved the world, He gave His only Son that whosoever should believe in Him would not perish, but have everlasting life.

That is the amazing fact that I treasure in my heart and ponder. While we were still sinning God loved us enough to come down and be with us, and then sacrifice that very life for us. Thank you Jesus. And a very Merry, Blessed Christmas to all of you and your loved ones!