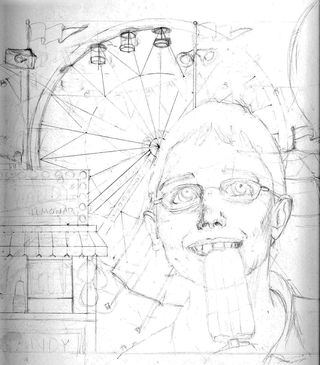 You are the God of great wonders!  ~Psalm 77:14
This is the rough draft of an illustration I've been working on for quite a while.  The idea is my son with an ice cream taking in the 'wonders' at the State Fair.  The State Fair runs every year at Labor Day which coincides with our birthdays.  We've had some good times at the fair -- pig racing, turkey legs, cotton candy, the fun house and our favorite, the baby animals.

At 17, he doesn't resemble this 'boy' at the fair much anymore.  He's bigger than his Dad now.  He's traded his 'dorky' glasses for contact lenses.  And we didn't 'do' the fair this year.  He's hurrying to get his driver's license.  He's busy applying to colleges and imaging how great it would be to go to school in Arizona and live on the West Coast.

I suppose when we consider the wonders of God, we tend to think of His big miracles, or the vistas from a mountain top, or an ocean shore or perhaps a powerful storm.  I think now of the wonders of life.  In the begining are two tiny cells, microscopic and insignificant.  But when they come together, there is life.  That life is totally dependent for the first 9 months, and still mostly dependent for the next 6 months or so.  But after that, growing up is also growing away.  This is a wonder also, the forming of a unique personality with skills, interests and desires so different from the givers of those 2 initial cells.  Forming attachments outside the family, forming ideas outside family's orthodox, this life becomes someone all its own.

And so I wonder at that 'wonder'.  I wonder if I have done enough, said enough, led enough to impart values, character and faith that will last.  I wonder how many mistakes he'll make, and if he'll be able to recover from them.  I wonder what my role will be once this boy is fully a man.  And I wonder at how amazing it is that, by faith, we can entrust him and his future to a loving God who will hold him in the palm of His hand. 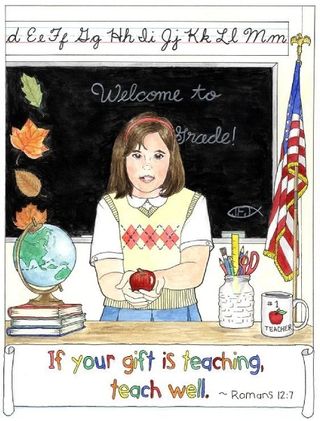 Train up a child in the way he should go: and when he is old, he will not depart from it. ~Proverbs 22:6

I love back to school time.  When I was younger, it was because I could get new crayons and colored pencils and other stationary, and because it was my birthday.  Now, it's my son's birthday and a measure of freedom in my day.  My apologies to the moms who suffer separation anxiety, but I did a little dance when they both got on the bus Monday.  The hour before that was filled with wake-up reminders, separate lunch-making efforts and some fancy breakfast parfaits to get them started off right.  Both kids ride the bus together for the first time this year, and it's the early bus.  My two night-owls got through Monday and Tuesday just fine, but by Wednesday their sleep deprivation was catching up to them!  You can lead a child to turn off the tv and computer and turn off the lights, but you can't make them fall asleep!

I'm very excited about all the interesting subjects the kids will be learning this year.  Geography, Astronomy, Genetics, World Cultures, Shakespeare, Psychology, Digital Art....wow, I wish I could go back to school.  Perhaps I will teach some day.  And our little tour of my college brought back a lot of memories...and some new fears about sending my son there next year.  Applying for college -- wow, that and the birthday is a double-whammy reminder of my age.  But more, it is a reminder of how quickly time slips by.  It's been 6 years since my son started Middle School like my daughter will this year.  She was starting kindergarten then.  It all went by sooo fast.  Here, see for yourself: 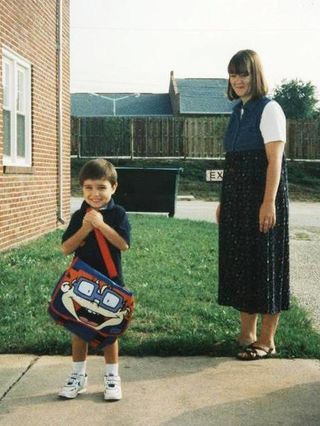 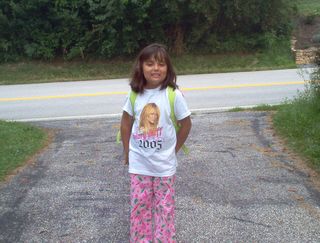 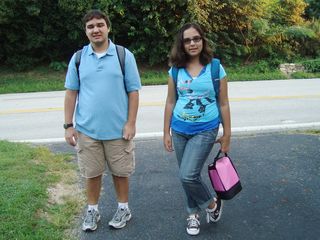 So now I find myself contemplating whether or not I have truly trained up my children in the way they should go.  I hope I have...I think I have.  I get those reports from other Moms about how well they behave when they visit.  But when they are really on their own, will they exhibit good character?  Will they make the right decisions even when it's tough or unpopular?  Will they keep following Jesus when they are confronted by worldly ideas of life, the universe and everything?  I suppose God knows.  Letting go and letting God is the hardest thing about being a Christian, and about being a parent!  Hmmm, I suppose I might have a little separation anxiety after all!

TO PURCHASE PRODUCTS WITH 'Apple for the Teacher' visit this link: